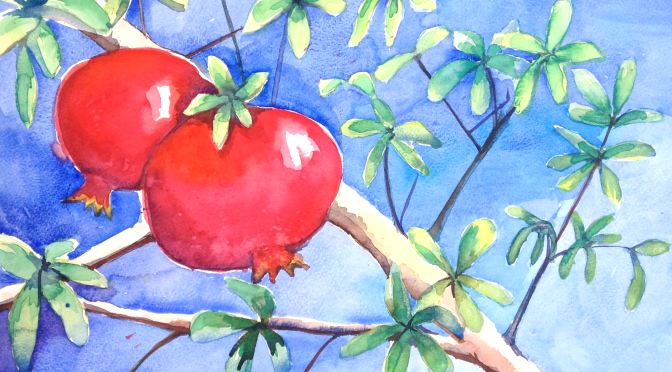 It’s nearly pomegranate season here on the island, and recently I saw a tree so laden that its branches were bowing under the weight.  These beautiful fruit are not quite ripe enough to be harvested, but heavy enough to change the shape of the tree that’s bearing them.  And it’s made me think again about the reality of bearing fruit in the kingdom of God.

Firstly, there are seasons.  The harvest has to come at exactly the right time. Too soon and the fruit isn’t ripe, too late and the wasps will steal it away.  Different fruit is ready at different times:  Accepting that life too has seasons and that God makes things happen according to his timing makes christian life a little bit less frustrating.

Secondly try as it might, this pomegranate tree will never produce a lemon, or cherries, or a sweet juicy nectarine.  Those things are wonderful, and I’m grateful that there are trees that grow them. But pomegranates are beautiful in their own way.  There’s something really powerful about seeking out what kind of fruitfulness God has for you in this particular season and then not wasting time or energy trying to do or be something else.

The third thing is that fruitfulness can be really heavy work – The branch that carries these fruit has taken time to mature and grow strong enough to bear them, but still, it’s bowing a little under the weight.   Sometimes fruitfulness is tiring: doing the things God is calling you to do, investing in the people God has given you, making the choices he is challenging you to make; all of those things weigh heavy.  But it doesn’t mean you’re getting it wrong.  Just that you need to make sure you make time to retreat into God’s presence to be filled and strengthened.  Just like the tree that needs to have a prop or two under its branches to carry the weight of its fruit  so we need to learn to lean back into him and let him shoulder the burden of ours.

If this is you – please schedule yourself some time with God as soon as you possibly can and ask for his strength and grace as you bear and gather in this harvest.

If it’s not you right now, can I make this a call of prayer for those that do need it?  I’m reminded of the time that Moses was praying over a battle, and the people of God were winning the battle as long as he had his arms raised in prayer, but would begin to lose as he tired and his arms fell. It’s a great story of the power of prayer, but I especially like the part where his friends realise what is happening and stand with him as they build stone towers that he can rest his arms against.

Perhaps you have a friend, or someone else who comes to mind, whose ‘branches’ are bowing under the weight of the ministry that God has given them.  Please pray for them. Call out to God and let’s be a part of releasing some supernatural strength into some parts of the kingdom that really need it! 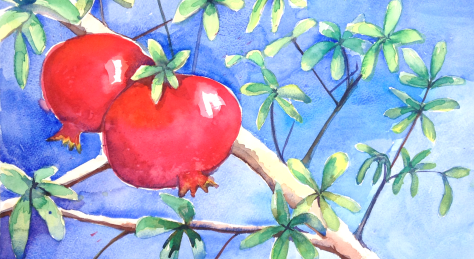 2 thoughts on “On fruitfulness”