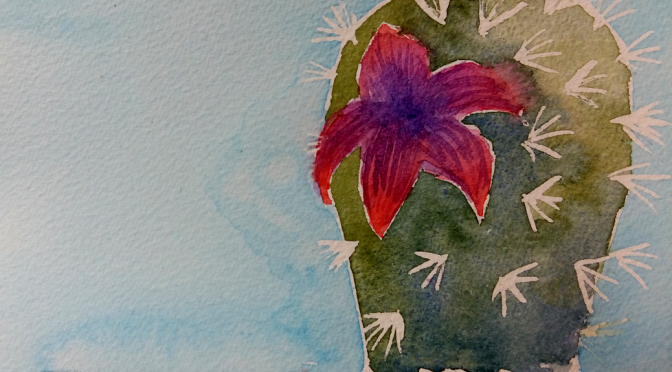 My husband once gave me a tiny flowering cactus for an anniversary gift, cheekily claiming that it was a much better picture of his love for me than a short-lived bouquet of greenhouse-grown shop-bought flowers.  He also told me his choice had nothing to do with the fact they were on special offer at the petrol station, or that he hadn’t remembered the date until after the florist was shut.

Flowering cacti make me smile because just a few days later I discovered that the bright pink flower – the living parable of my beloved’s love for me –  was in fact a dried straw flower, stuck onto the tiny baby cactus with a glue gun.
Apparently I’m not the only one to a have fallen for this trick! The dried flowers can even sometimes still open and close as humidity levels change, giving the impression they are alive.  It’s only when you turn them upside down that the big blob of glue gives the game away.

This picture speaks to me about choosing not to join in with the worldwide game of pretending to be something you’re not.  Cacti are amazing, they can survive the heat and drought and make use of the rain when it comes. It may take years and years for them to come to maturity, but when they do the flowers are spectacular, eye-catching and extraordinary. Every bit worth the wait.

I found out about the great flowering cactus scam while listening to a special edition of Gardeners’ Question Time on the radio.   It was then that I reached out, turned my love-cactus over and discovered the glue-blob of truth.  (Sometimes it takes a moment of revelation and the willingness to ask ourselves an uncomfortable question to make us realise where we’re faking it.)  After I’d recovered from the shock I listened to the rest of the program to see what I could do to get my cactus to produce a genuine flower.

According to Bob Flowerdew, the answer is to give it as much sun as you possibly can, and then wait… maybe for years…

Don’t settle for faking it.  You are a person who is meant to flower.  In your own way, and in your own time you will unfurl into a hand-designed, individual bloom. And that flower, whatever it looks like, will bring glory to the one who created it and has always known how it will be.

Until then, sit in the light.  Know that every ray of it you absorb will go into producing an incredible bloom.  Much better than a stuck on dried flower could ever be.