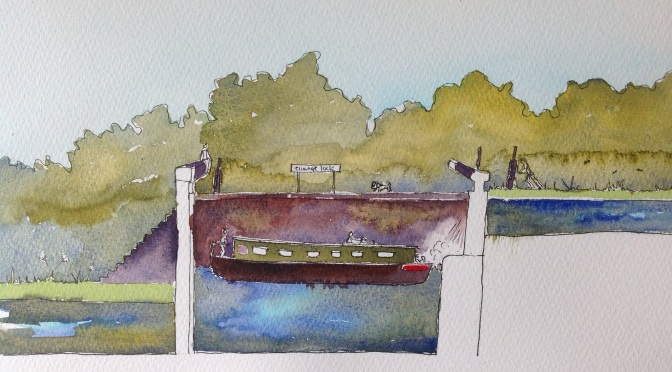 August seems like the perfect time to send a holiday postcard, so here’s one from the week my family and I spent traveling through Shropshire, Cheshire and the West Midlands on a canal boat.

Water doesn’t like to slope, so when the great engineers who built the canal systems encountered a landscape that needed to be climbed, they built amazing water-filled lifts called locks. Each lock is a chamber with heavy gates at each end which can be filled up or emptied of water so that the boat can rise up or lower down to the level of the next stretch of canal.

To fill the lock you use a turning handle to wind up heavy paddles in the gate which let water into (or out of) the chamber at a tremendous rate creating a huge amount of noise and splash. We quite enjoy working the locks but there’s no denying that it’s really hard going! Pushing the gates open against the weight of the water, closing them again, winding up the paddles, waiting for ages for the lock to fill then pushing the gates at the other end open is slow and heavy work, but it’s amazing to witness the extraordinary power of all that water moving from one place to another.

And it’s necessary: without these powerful level-changers it would be impossible to travel through the ups and downs of the British countryside.

I’ve written before about the seasons we go through in life, being a child, being a parent, being a parent of children who have grown up, living in one place or another, working, retirement…

Often it’s the shifts between seasons that are the hardest to deal with. The parts where you’ve said goodbye to what was, but haven’t really stepped into what is next. Those times, like the minutes that the boat is in the lock, can be turbulent, a bit scary and slow in passing.

The locks reminded me this week that change, even good change, like getting married, having a child or starting a new job, can be really hard work.
Like traveling through a lock, there is a cost to change which is measured in effort and in unsettling turbulence but there is also a sense something incredibly powerful is going on somewhere below the surface. The other hung it’s reminded me is that change is also really necessary if you want to continue on with your journey.

I often describe myself as being change-intolerant, a natural settler. But I also really want to keep pressing onwards towards what’s ahead and like water, life doesn’t slope, so there are bound to be locks ahead.

The challenge to me is to willingly step into times of change, to accept the turbulence and scariness with faith, because I’ve realized that even if the only way forward is through locks, that’s the way I want to go.

Remind me of that when I’m complaining about it 🙂