This is just a theory, and as yet not scientifically tested, but I think our sofa (couch/settee/whatever) might actually suck loose change out of my pockets when I sit down. It’s probably a swedish furniture company conspiracy.

A brief investigation this morning revealed not only a pile of coins, but also an array of pencils, hair bands, guitar picks, earrings, polly pockets, barbie shoes, teaspoons, socks and the TV remote (which was what I was actually looking for!) And it got me thinking about how in the middle of everyday life stuff gets lost down the back of the sofa, and we don’t even miss it.

This picture makes me smile because I once received (rather publicly) a slightly unflattering prophetic word that I was like a spaniel tearing a sofa apart to find a bone that he could smell there.  I’ve often wondered what on earth it meant… but today’s postcard is casting a little bit of light on it for me.  Because God is talking to me about things that get lost down the back of the sofa, and which are actually pretty easy to find again, if you take the time to go looking.

Against all hope, Abraham in hope believed and so became the father of many nations, just as it had been said to him, “So shall your offspring be.”  Without weakening in his faith, he faced the fact that his body was as good as dead—since he was about a hundred years old—and that Sarah’s womb was also dead. Yet he did not waver through unbelief regarding the promise of God, but was strengthened in his faith and gave glory to God,  being fully persuaded that God had power to do what he had promised.

It made me think about how Abraham had held on to that promise that he had heard from God, not letting go of it even in the face of strong evidence that it wasn’t even possible. He kept hold of it through years and years of waiting and held on to it even when it became clear that he had seriously messed up.  He held onto that promise, and kept giving glory to God for what he was going to do.

Abraham didn’t let the promise of God go slipping quietly out of his pocket and into the forgotten realms of the back of the sofa.

I on the other hand, do.  When people share a prophetic word or scripture with me I often write them down and then pray about them for a month or two.  Then somehow they slip away quietly into some dark part of my memory, not completely lost, but dusty and out of sight.

But, it’s very easy to find things that have slipped down between the cushions… you just have to look.

Today my friends, is a great day for searching again for the things God has said to you, for the promises he’s spoken.  It’s a day for holding those promises up to the light and blowing the dust off of them.  It’s a day for choosing to give glory to God for what he has promised and for being ‘fully persuaded that God has the power to do what he [has] promised’.  I’m not saying that today is necessarily the day that you step into the fulfillment of all those promises. Faith shows up in the waiting. And although Abraham, man of faith, waited a long, long time, he did so with the promise of God in his hand. 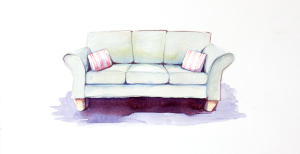 7 thoughts on “Down the back of the sofa”