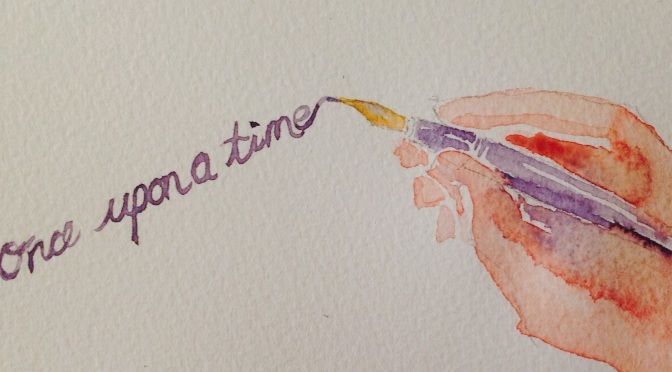 Storytelling can damage your health.

I realised this a week ago, in the shower, often the scene of epiphany moments for me.  I was getting ready for a lunchtime flight back to Cyprus and while I was washing my hair I let my mind wander off for a bit..

A few moments later, my heart pounding and feeling slightly sick, I realised that I had been telling myself a very stressful story about a security guard at the airport deciding my ipad was dodgy and trying to take it away, my older daughter melting down and the six year old pulling one of her disappearing acts…

In the space of a few minutes I’d gone from feeling fairly relaxed about my flight to having butterflies in my stomach and a racing pulse.

And that was my epiphany:  I was getting stressed about something that was entirely imaginary.  My brain was making up a story and yet my emotions were reacting as if the story was real and true.

A story can explain something difficult to grasp beautifully simply, it can lodge in your mind and keep whispering its message for years to come.  The news that millions are suffering can pass us by, but the story of one family, or one child can awaken the compassion that leads to action.

And I’m a story-phile: I love, reading, writing, collecting and telling them.  But usually I think about the postive ways a story can influence someone. In my shower-epiphany I realised that these  little stories I tell myself, the ‘what-would happen-if’ stories, are making me stressed when I don’t need to be, and that’s really not good.

Of course it’s not just the what-would-happen-if stories that I need to take control of and force into the shape of the truth.  The even more dangerous ones are harder to spot..

Those stories that start ‘he thinks….’ or ‘she thinks’ and never have a happy ending. When someone does something that hurts or offends me, my brains tends to freewheel into storytelling… “He did that because he thinks I’m not important”,  “She did that because last week I forgot to phone and she thinks that I am not a good friend and…”, “Because I did that, he is going to feel really bad and then…”

Experience tells me that those lines of thought provoke a load of negative feelings- sometimes the really powerful kind that leave you in the bottom of a hole for a few days.  I wonder if some of you reading this also sometimes end up expending a huge amount of energy thinking about, worrying and feeling bad about something which you wrote yourself and isn’t even true.

Of course, as well as making us feel bad and messing up our relationships with people around us, all these stories also occupy us very nicely and distract us from the many things that God would like us to be thinking and caring and feeling and doing something about.

Or some other stories that need rewriting (particularly just now): more or less any that begin ‘that person doesn’t deserve my compassion because…’ or  ‘they don’t deserve the freedom, safety, stability or shelter that I have because….’

All stories that need rewriting

I’ve decided that this week’s challenge is to stop reacting to those imaginary tales and to learn to stop telling myself them.

To ask God to show me every time I’m telling myself a story.

To ask him to show me the truth – what the real story is.

Finally to spend some time thinking about this:

We demolish arguments and every pretension that sets itself up against the knowledge of God, and we take captive every thought to make it obedient to Christ.  2 Corinthians 10:5