Sometimes you just become so used to things that you can’t see them anymore.

After we took down the old cooker hood in our first home we were left with an ugly taped-up wire sticking out of the kitchen wall. In the beginning it really annoyed me, but after a few months I stopped noticing it and after two years we were discussing jobs that needed doing and I genuinely thought we had already had it fixed!

Even gruesomely patterned wallpaper like this one can eventually become so familiar that you no longer notice it (or no longer find it offensive!).

Whether or not we notice it, most of us have wallpaper inside our heads:  The background messages of the things that were spoken over us, or that we said to ourselves, when we were kids and trying to make sense of the world.  Messages like ‘I’m not important’ or ‘it’s not safe’, ‘I’m lazy’ or ‘I’m not good enough’.

Many of us have come to faith in Jesus and have valiantly tried to paste the truth he has to say about us over the top of the words of the past, covering up the old messages with the new ones that know in our heads are true.

I don’t know about you, but my trouble is that the wallpaper of my past is definitely of a 1970’s variety – Bright bold patterns and made of shiny vinyl.  It’s a big job to get any new wallpaper to stick over the top of a decorama vinyl like this one… and even if you do get it to stick, chances are that a pattern this bright and bold will show through whatever you paste on top!

If this was a wikihow, there would be pictures… but:

Stage One: Notice what’s there

Ask God to show you what it is your believing about yourself, or Him that is not true.  Even if you’re so used to it that you don’t really see it anymore, ask him to show you the wallpaper.

Stage Two: Look at it

Admit that what’s there is not the truth about you.  Even if you’ve got so used to it that it feels kind of comfortable and familiar, if it’s not what God says it has to go…

Stage Three: Get rid of it

Now you’ve seen the ugly truth… Don’t just try to cover it up again! Start stripping it off. Confess to God that you believe a lie about yourself, or Him.  Repent of it.  Choose not to behave as if it’s true.. Ask him to reveal the truth under the layers…  Just as it takes steam to melt the glue that sticks the paper in place, so it takes some prayer (yours and maybe someone elses) to loosen the grip of old lies in your life… but it can be done.

Honestly?… Anyone who has stripped off Vinyl wallpaper will tell you it’s really hard work, but not impossible.  Be kind to yourself… do a bit at a time!

And finally- Whenever we take down old wallpaper in our house in England, I’m always afraid that the plaster on the walls is going to come away with it, like actually it’s only this sheet of wallpaper that’s holding the wall together, and taking it down is probably a really bad idea.

If you’re afraid of taking down your wallpaper, because of what you might find underneath – know this: The moment you trusted in Christ, and handed over the reins of your life to him, the plaster, the part at the core of who you are, underneath all the messages you’ve papered on, was made completely new.

Without bump or blemish.

“Therefore, if anyone is in Christ, the new creation has come: The old has gone, the new is here!” 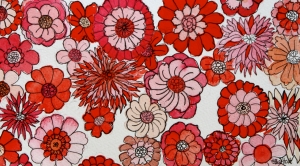 Ask God if there’s a wall that needs a bit of attention in your heart.  Ask him to show you if there’s a lie you are believing about yourself or about him.

It might not just ‘fall into your head’, but at some point this week it might be that the Holy Spirit draws your attention to something you think or feel, or an incident that hurts you or angers you more than you think it should.  If you have one of these ‘aha’ moments, choose to look at the wallpaper and see it for what it is.  Then start to take it down.